A few months back, I signed up to take part in The Pride and Prejudice Bicentenary Challenge 2013. My original list of Pride and Prejudice related works to look into and review are listed here. Thanks to Austenprose - A Jane Austen Blog, who also happen to be hosting said P&P Challenge/Celebration, I was made privy to The Lizzie Bennet Diaries: An Online Adaptation of Jane Austen's Pride and Prejudice. With that said, I am adding this ingenious remake to my list of reviews.

If you are a fan of Pride and Prejudice, even in the least little bit, you HAVE to watch this vlog and read some of the commentary. In short, it is brilliant. The series is the brain child of Hank Green and Bernie Su and brought to life by their amazing development team.

There are three Bennet sisters instead of five, Jane, Elizabeth (Lizzie), and Lydia. Mary and Kitty come into the story as a cousin to the sisters (Mary) and, well, an actual kitten that belongs to Lydia (Kitty). There are Bingleys (Bing and Caroline Lee), Darcys (William and Gigi), a Mr. Collins (Ricky), a George Wickham, and a Charlotte Lucas (Charlotte Lu). There is even an elusive Lady Catherine de Bourgh (who we never actually meet, but is mentioned whenever Ricky appears). Mrs. Bennet is still hung up on getting her daughters married; Mr. Bennet is still utterly unconcerned. Basically, the plot follows the book perfectly with just a few modern-day changes. Lizzie turns down a business proposal which Charlotte later accepts rather than a marriage proposal from Mr. Collins. George Wickham threatens Lydia, who he has manipulated into falling in love with him, with the release of an internet sex video rather than there being a runaway marriage scandal (Darcy still saves the day, by the way). Netherfield is still where Bing Lee lives, but Pemberley is Darcy's company rather than his estate. 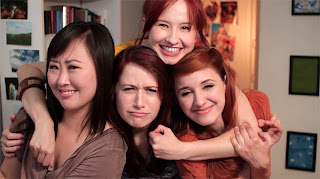 The character development is Austenesque in its brilliance. In some of the Behind The Scenes (BTS) commentary Green and Su discuss the fact that one of their major goals with the project was to take some of the more minor characters in Austen's epic novel and create bigger and better stories for them. This "fleshing out" so to speak is best seen in Lydia's character, but can also be seen with Charlotte, Wickham, Bing, Gigi, and Caroline. I especially enjoyed the development of Caroline Lee's character. I'll let you watch the videos to see for yourself, but at the very least, I'll direct you to BTS: Netherfield Questions for a little more insight. Every time a new character was introduced, I found myself grinning from ear to ear and thinking, "this character was cast magnificently."

A few highlights that I found especially note-worthy:
Episode 53: Mr. Collins' fiancee lives in Winnipeg, MB?! Ha! (I've lived in Manitoba my entire life and have family in Winnipeg). I'm not sure what the connection is to Winnipeg, but I laughed out loud when it came up in the videos. The series does take place in a number of major U.S. cities after all.
Lydia Bennet: Halloween, Holla!!: I love when Lydia says that Jane is "dressed as a fierce wanderer, adventuring through a foreign land." It made we want to come up with a costume description for my outfits everyday! So insightful!
Episode 60: DARCY! Well, holy hannah! Talk about intense! This episode is done so well. I am actually quite glad that I just stumbled upon this incredible project when it is nearing its completion. If I had to wait days in between these intense Darcy episodes, I think I'd burst!
Episode 69: Jane's impression of Lydia is so totes supes adorbs!
Lydia Bennet: Episode 24: "You were just there," to Wickham in reference to making out with him on New Year's Eve. Go girl!
Lydia Bennet: Episode 25: I was going to mention this earlier on in the vlog series, but I wasn't entirely sure that my connection was accurate until this episode. Lydia Bennet is my younger, crazier sister, not quite to the Ly-dee-yah extreme, but always head-over-heels for the wrong guy. Still love her to infinity though, always will <3. 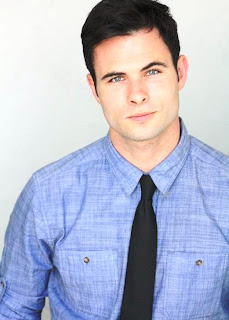 Episode 80: Ok, I was uncomfortable watching this episode which only attests to how great it was...and...Darcy's suspenders are so perfect! He'd be so, let's just say, HOT, but the suspenders just crack me up and totally make his uptight character.
Episode 87: Yep, I cried.
Episode 88: Yep, me and my baby sis to a T.
Episode 98: The moment in Pride & Prejudice that EVERY fan waits for and then swoons over. I'd almost go so far as to say the The Lizzie Bennet Diaries does it better than Austen did herself...almost!

In one of the very first BTS commentaries The Lizzie Bennet Diaries is described by its creators as "a show about people interacting with people;" when I read that, I thought to myself, "that's exactly what Austen's novel is." From 1813 to 2013, Pride and Prejudice remains a story about people interacting with people. We love the characters and we love their stories.

The bloggers on Austenprose use Regency Stars to give ratings to the works they review so to pay homage to them and all things Austen that they bring to my life I will give my reviews for The Pride and Prejudice Bicentenary Challenge 2013, Regency Star ratings as well.

The Lizzie Bennet Diaries: 5 out of 5 Regency Stars